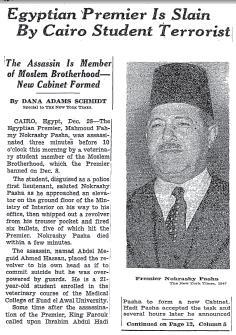 CAIRO – The Egyptian Premier, Mahmoud Fahmy Nokrashy Pasha, was assassinated three minutes before 10 o’clock this morning by a veterinary student member of the Moslem Brotherhood, which the Premier banned on Dec. 8.

The student, disguised as a police first lieutenant, saluted Nokrashy Pasha as he approached ab elevator on the ground floor of the Ministry of Interior on his way to his office, then whipped out a revolver from his trouser pocket and fired six bullets, five of which hit the Premier. Nokrashy Pasha died within a few minutes.

The assassin, named Abdel Meguid Ahmed Hassan, placed the revolver to his own head as if to commit suicide but he was overpowered by guards. He is a 21-year-old student enrolled in the veterinary course at the medical College of Fuad el Awal University.

Some time after the assassination of the Premier, King Farouk called upon Ibrahim Abdul Hadi Pasha to form a new Cabinet. Hadi Pasha accepted the task and several hours later he announced his new Cabinet roster of sixteen members.

An aide de camp, who was standing at Nokrashy Pasha’s left, and others carried the Premier into an adjoining office, where he died before a physician arrived.

Ibrahim Dessouki Abaza Pasha, Minister of Communications in the Nokrashy Pasha Cabinet, disclosed later that the assassin had told the police that he had killed the Premier “because he caused Egypt to loose the Sudan, surrendered Palestine to the Jews and dissolved the Moslem Brotherhood which had been the only organization fighting for Islam in the last twenty years”.

Official quarters disclosed for the first time that there had been another attempt on the Premier’s life on Nov. 26. A young official of the Ministry of Commerce named Tear Elbar was said to have brandished a revolver as Nokrashy Pasha was entering the Saadist party club but he was disarmed before he could shoot.

King Farouk at noon called on Nokrashy Pasha’s widow and his young son and daughter and expressed condolences and prayed over the body of the Premier.

(This excerpt is the first part of the original article)