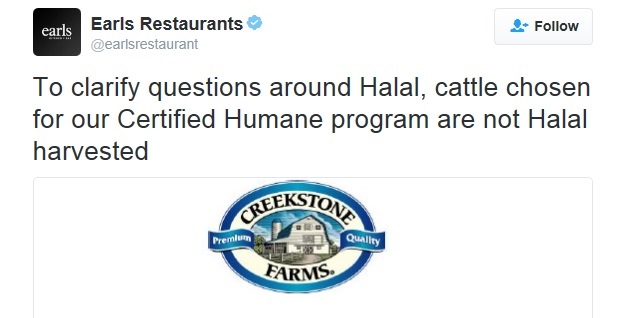 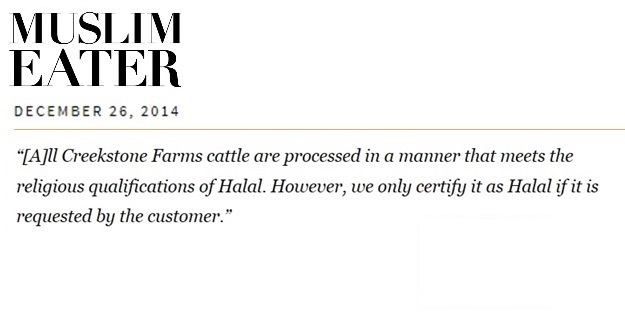 Click on the images to view the original messages

In their Twitter message, Earls Restaurants state that “Cattle chosen for our Certified Humane program are nor Halal harvested.” However, Nebraska-based Creekstone Farms, Earls’ new beef supplier, told the Muslim Eater that: “[A]ll Creekstone Farms cattle are processed in a manner that meets the religious qualifications of Halal. However, we only certify it as Halal if it is requested by the customer.”

All Creekstone’s meat is ‘halal processed’ but the customer will receive the halal certification on request only.

On April 26, 2016, Earls Restaurants President, Mohamed Jessa, announced / Archive.Today that, from then on, the 66 locations of the chain (59 in Canada and 7 in the U.S.) would get their supplies of beef from Creekstone Farms in Nebraska. The implication is that Western Canada cattle ranchers will stop supplying the meat to the chain that was established in Edmonton (Alberta) in 1982. Except for 5 Ontario locations and one in Yukon, all Canadian restaurants are in Alberta, Saskatchewan, B.C., and Manitoba.

The reaction to Earls’ decision was swift and angry. Even Saskatchewan Premier, Brad Wall, whose province “has a 1/3 of Canada’s beef herd,” twitted that “@earlsrestaurant didn’t even consult with Canadian cattle producers before opting for US beef.” A Boycott Earls campaign has started in Western Canada.

Earls justifies its move by claiming that it wants to serve 100% Certified Humane Beef. According to Sheila Gunn Reid from The Rebel.media, the certification, provided by Humane Farm Animal Care in Herndon, Virginia, is a gimmick:

Sheila Gunn Reid / Archive.Today: As for the humanely certified designation Earls wants Alberta farmers to have? Well, it’s a racket. […] There is a fee for farm inspections of $600 per visit, there is a fee to have a supervisor at the processing and slaughter facility every time farmers take their livestock to slaughter of $700 per day. And then there is a per-head fee based on the size of the farm and the type of animal. It’s a gimmick. It’s feel good nonsense for people who feel guilty about their comfortable urban lives.

In December 2014, Creekstone Farms told the Muslim Eater magazine that “[A]ll Creekstone Farms cattle are processed in a manner that meets the religious qualifications of Halal. However, we only certify it as Halal if it is requested by the customer.”

This means that Earls may receive its supplies without the halal seal although its meat went through the very procedures endorsed by Creekstone’s halal certification agency. This is why Creekstone Farms can claim that all its beef is ‘halal processed’ but not necessarily ‘halal certified’ because the proof of halal certification comes on request only.

Creekstone Farms has indicated that its halal certification is provided by a Nebraska-based agency called Halal Transactions of Omaha (HTO). Below, the top image comes from Creekstone Farms’ homepage (2014) and the bottom image from its Twitter account (2015). 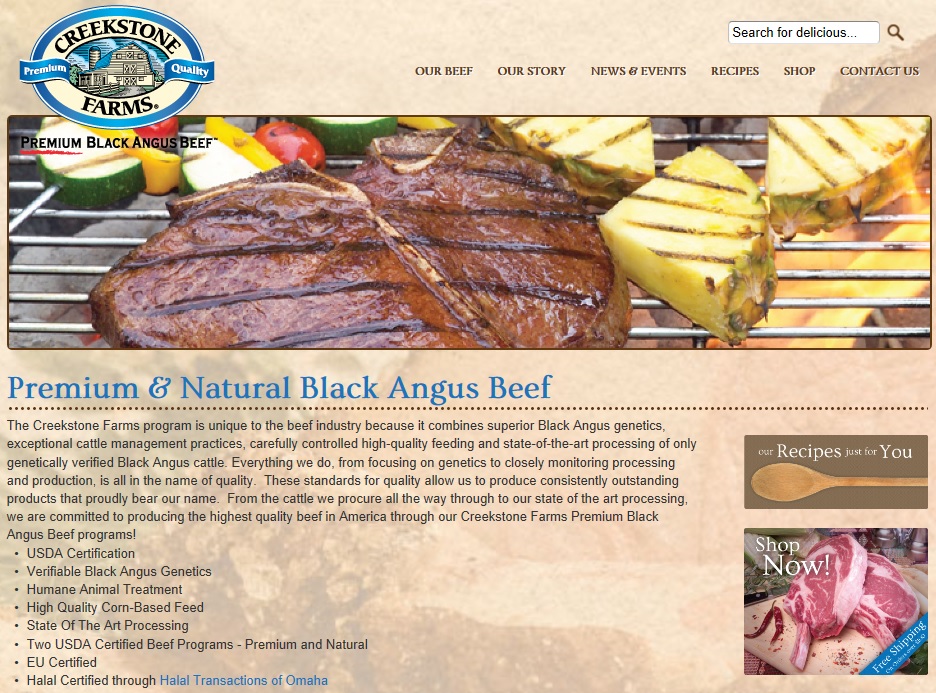 Creekstone Farms on Twitter (2015): We receive our Halal Certification through Halal Transactions of Omaha.

On April 29, 2016, in the midst of the Earls controversy, Creekstone Farms issued a press release stressing that they “do not cut the animal’s throat prior to stunning.” According to Creekstone Farms, its meat is halal because the cattle “are blessed using the ritual Islamic prayers required during the slaughter process.”

In March 2016, HTO president, Ahmad Al-Absy, has clearly stated that, according to him, there are no standard halal procedures:

It may be impractical to have a single set of Halal standards that all Muslim authorities around the world can agree on.  Because of the disagreements around what’s right or wrong, those in the Halal industry have begun forming associations amongst themselves.

Some Muslim activists use the expression low “halal level” to characterize products that do not comply with procedures that they deem essential.

On its website, Halal Transactions of Omaha mentions its affiliation with the Islamic Society of North America (ISNA).

ISNA-Canada operates its own halal certification agency / Archive.Today. In 2013, an ISNA-Canada substructure had its charitable status revoked by the Canada Revenue Agency for its links with a terrorist entity. According to the Canadian government agency, the ISNA substructure had provided tax receipts to a non-charitable entity collecting money for a Jamaat-e-Islami-linked terrorist organization in India.

In 2012, acting as Chief Imam of the Istiqlal (Istiklal) Mosque in Jakarta (Indonesia), Ali Mustafa Yaqub stated that “Muslims who say that Muslims are free to choose their religion must repent.” This news item was reported by the Borneo Post and archived by JihadWatch. According to Sunni scholar Youssef Qaradawi, “If they [Muslims] had gotten rid of the punishment [often death] for apostasy, Islam would not exist today.”

Nonie Darwich (Gatestone Institute – February 5, 2013): “If they [Muslims] had gotten rid of the punishment for apostasy, Islam would not exist today” ALSO Video of Qaradawi

In 2010, HTO Sharia advisor Ali Mustafa Yaqub was photographed with President Obama and his wife Michelle during a visit at the Istiklal Mosque in Jakarta (Indonesia). 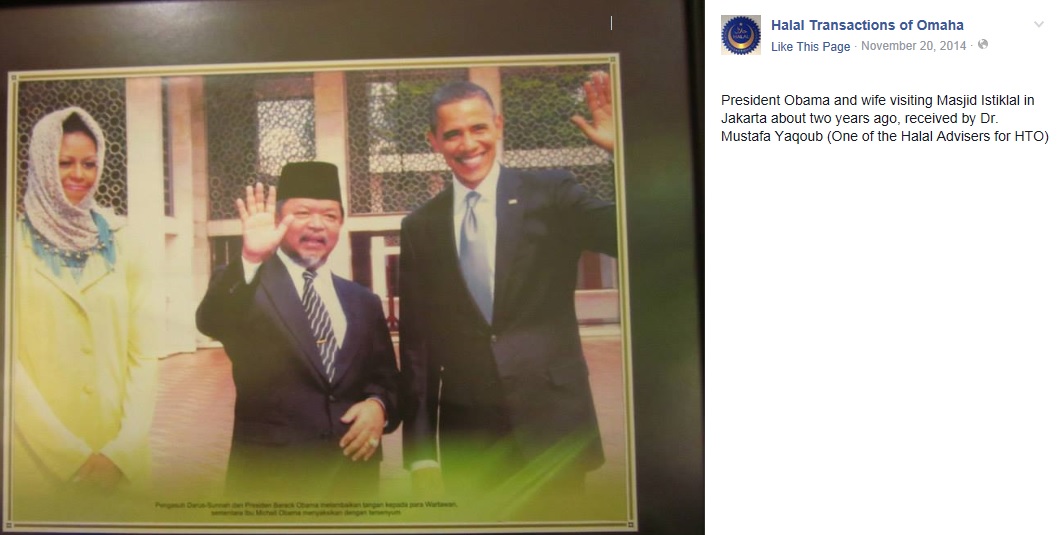 In 2008, Assad Busool was listed as a participant to a conference organized in Libya by the World Islamic Call Society. The terror funding activities of this Libyan organization established by Muammar Gaddafi in 1972 were documented in a U.S. trial and later by the Canada Revenue Agency. 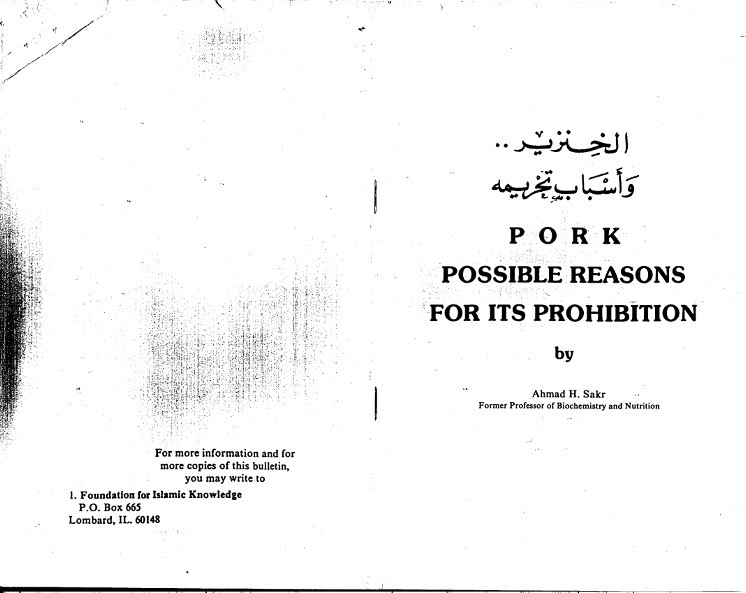 In 2013, Rachid Belbachir was described by IFANCA as its resident scholar when he moderated an event at an ISNA convention in Washington. IFANCA is the largest halal certification agency in North America. In his book Pork – Possible reasons for its prohibition (pp.11-12), long time IFANCA Board member Ahmad Sakr (1933-2015) made an extraordinary suggestion to explain why pork is prohibited in Islam. According to him, if we accept a literal interpretation of verse 5:60 of the Koran, swine could be human beings, in this instance Jews, who were degraded to an animal stage. Click on the image to the right to view the excerpt of his book.

A [U.S.] federal judge went below guideline sentencing Thursday, giving Midamar Founder William Aossey, Jr., only two out of a possible nine years in federal prison for organizing a fraud to pass off halal meat to Malaysia that otherwise couldn’t have been shipped based on slaughtering methods.