Point de Bascule does not endorse the content of this document. It is archived on this website strictly for reference purposes.

The director of a charity whose Canadian branch was shut by Ottawa for financing terrorism pleaded guilty in the United States yesterday to diverting donations meant for widows and orphans to Islamic fighters in Chechnya and Bosnia.

In an agreement with U.S. federal prosecutors, Enaam Arnaout, a 41-year-old naturalized American citizen who has been associated with Osama bin Laden, entered a guilty plea to racketeering charges but did not admit to any ties to al-Qaeda.

The plea came as the court in Chicago was preparing to select a jury for Arnaout’s trial on seven counts alleging he used his charity, Benevolence International Foundation, to finance Islamic terror campaigns.

Six of the counts were dropped in exchange for the plea. He is facing a possible 20-year sentence but federal prosecutors said his jail term might be significantly reduced if he co-operates with investigators.

“This is the first time the government has brought criminal charges against a director of a U.S.-based charity connected to terrorism,” said Rita Katz, director of the SITE Institute, a Washington, D.C., terrorism research group.

“The results indicate that it is easier to charge an individual with racketeering or money laundering than with material support to a terrorist organization,” said Ms. Katz, part of a legal team suing the charity on behalf of the victims of Sept. 11.

The case of Benevolence International showed how some Islamic aid agencies in such countries as Canada have secretly supported violent Muslim jihads, or holy wars, around the world by illegally redirecting their donors’ money.

Benevolence International is based in Illinois but had branch offices in several countries, including Canada. The Canadian branch began operating in 1992, with offices in Mississauga and later Waterloo. The organization raised money from Canadian mosques and Muslim student groups.

While Arnaout claimed to be running a humanitarian aid organization, U.S. authorities said he was funding bands of Muslim fighters carrying out what they see as their religious duty to wage holy war. In March, authorities searched Arnaout’s office in Bosnia and found documents linking him to bin Laden. He was arrested the following month.

“Various documents also established that Arnaout worked with others — including members of al-Qaeda — to purchase rockets, mortars, rifles and offensive and defensive bombs, and to distribute them to various mujahedeen camps, including camps operated by al-Qaeda,” the U.S. Treasury Department said.

In addition, Benevolence International was connected to Ahmed Khadr, a Canadian Muslim extremist in the bin Laden empire whose three sons, Abdullah, Abdul Rahman and Omar, are trained al-Qaeda fighters.

When reports about Benevolence first surfaced following the Sept. 11 attacks, Faisal Kutty, the spokesman for the Canadian branch, released a statement calling the allegations of a terrorist link “false rumours and innuendos.”

But the Waterloo office closed its doors last June. On Nov. 19, 2002, the United States and Britain designated Benevolence a “financier of terrorism” and asked the United Nations to freeze its funds. Canada complied on Nov. 22, ordering banks to seize the group’s assets.

Several officials associated with the charity are still active in other Canadian non-profit groups, such as the Muslim World League. The Canadian government has not determined what happened to hundreds of thousands of dollars collected by BIF-Canada.

The Canadian wing of Benevolence is being sued by hundreds of people who lost loved ones in the Sept. 11 terrorist attacks. They are alleging the group helped finance al-Qaeda and is therefore partly responsible for 9/11.

Agence France-Presse / Enaam Arnaout, founder of the Canadian branch of the Benevolence International Foundation, poses with a machine gun at a training camp for Islamic fighters in this photograph released by U.S. authorities. The organization, which had offices in Ontario, raised hundreds of thousands of dollars from Canadian mosques and Muslim student groups. The group’s Canadian assets were frozen by Ottawa in November. 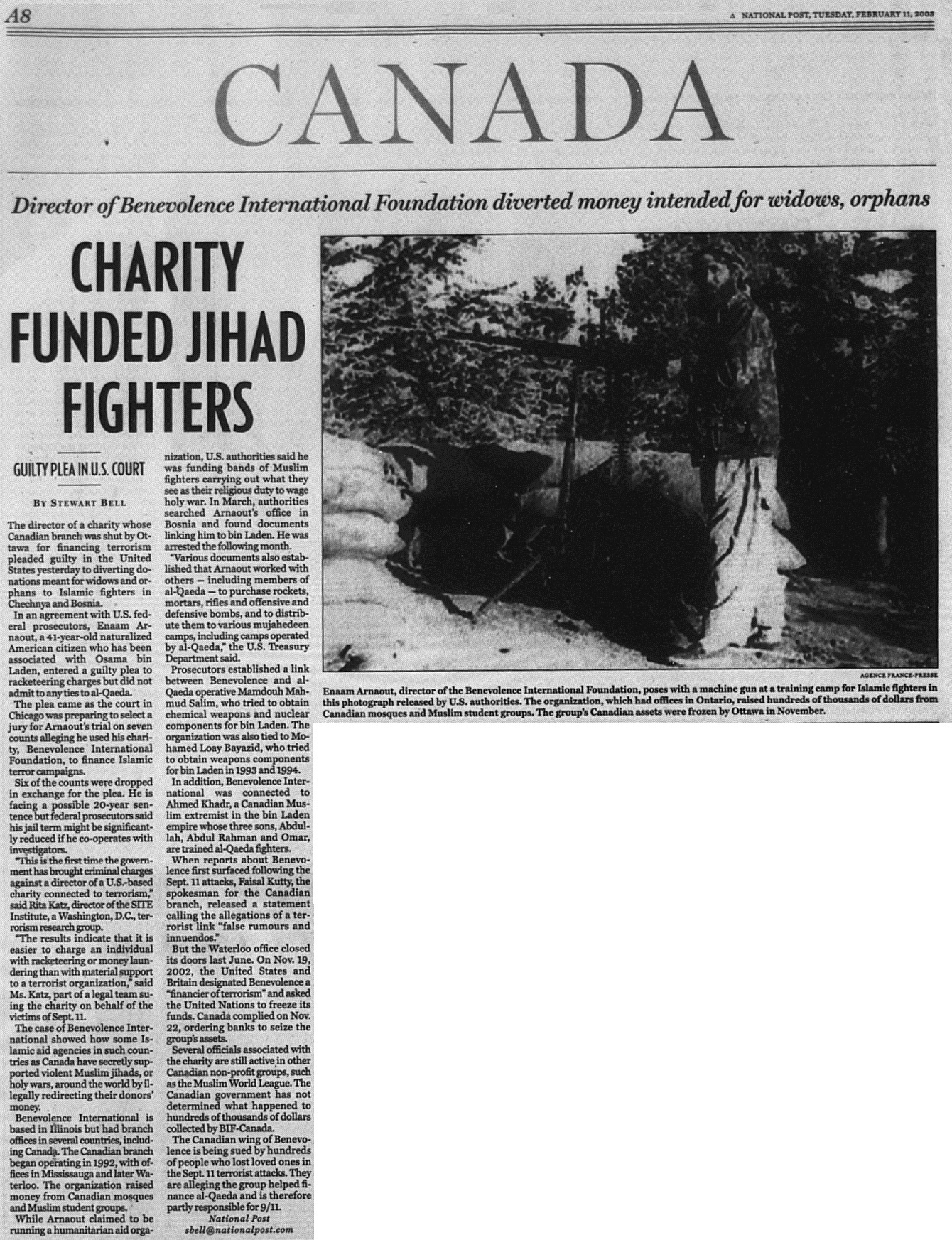