Canada Revenue Agency issues Notice of Suspension to IRFAN
IRFAN is a partner of the Muslim Association of Canada (MAC), an organisation who, along with Présence musulmane, organised the Tariq Ramadan conference in Montréal.
By Point de Bascule
April 16th 2010

More news about the besieged Canadian Islamic “charity” that’s benefited from your tax dollars, and sends money to the Middle East.

Lawyer-to-the-Islamists, Mr Naseer “Irfan” Syed, has issued a news release on behalf of his client, the International Relief Fund for the Afflicted and Needy (Canada), better known as IRFAN. Syed is an associate of former CAIR-CAN Co-Chair – and leading Islamist lawyer – Faisal Kutty. Readers will remember Kutty as the son of controversial imam, Ahmad Kutty, best known for his brief detention by US authorities and his approval of the radical CAIR-CAN as a recipient of Islamic zakat donations. The CAIR-CAN organization is the Canadian chapter of the US unindicted co-conspirator, CAIR.

The IRFAN organization has been alleged by some to be connected to a group that the US Justice Department named an unindicted co-conspirator in the successful US Holy Land Foundation terror-funding trial. Unfortunately for IRFAN, the Canada Revenue Agency (CRA) recently suspended IRFAN’s right to issue tax-deductible receipts to donors.

If the reader is left with any doubt about MAC’s links with the Muslim Brotherhood, their website makes it abundantly clear: 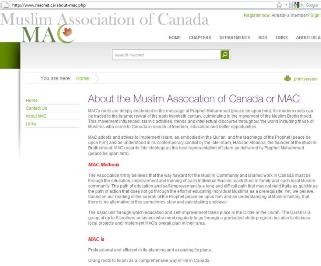 “MAC adopts and strives to implement Islam . . . as understood in its contemporary context by the late Imam, Hassan Albanna, the founder of the Muslim Brotherhood.“

One has to marvel at the audacity of MAC to endorse Albanna, who proclaimed that armed “Jihad is obligatory on every Muslim,” and that martyrdom in the name of Allah is better than life on earth.

To those of us Muslims who escaped the tyranny of Islamists in the Arab world and South Asia, shivers run up our spine when we see the ease with which MAC and other Islamists can fly under the radar … [Tarek Fatah, “CBC and jihad,” Calgary Herald, 11 December 2008, See also http://www.montrealgazette.com/news/Tariq+Ramadan+Muslim+Brotherhood/2906604/story.html.]

Meanwhile, how is the tax-supported IRFAN linked to this organization? Among other initiatives, IRFAN was credited with helping facilitate the visit of jihadist imam ex-mufti cheik Ekrima Sabri to Montreal, where he spoke to an adoring audience of 500 at the MAC Laurentien Cultural Center, 12253 Laurentien Blvd, in the Ville Saint-Laurent borough in Montréal. This ex Jerusalem Grand Mufti is also well known to have publically supported a law permitting husbands to rape their own wives.

As for the CRA suspension and IRFAN’s desperate attempt to play down the more sinister implications of this, see below:

MISSISSAUGA, ONTARIO–(Marketwire – April 15, 2010) – The International Relief Fund for the Afflicted and Needy (Canada) responded today to misinformation by third-parties regarding the decision released April 13, 2010, by Canada Revenue Agency (CRA) to suspend IRFAN-Canada’s tax-receipting privileges and status as a qualified donee under the Income Tax Act (ITA) for a 12-month period of time.

Despite speculation to the contrary, it is essential to note that CRA has not suspended IRFAN-Canada based on any findings of improper uses of charitable donations or association with illegal individuals or organizations.

CRA has cited some deficiencies in record keeping and production, which IRFAN-Canada believes to be minor, to justify this exercise of its broad powers under the ITA. For example, out of the thousands of items that were demanded by CRA, less than a few dozen items that are under the control of foreign banks and foreign telephone companies remain at issue. These items account for less than 0.2% of its financial transactions from 2005 to 2008. IRFAN-Canada believes that it is for this reason that CRA chose to only suspend receipting privileges instead of proceeding with revocation.

IRFAN-Canada will continue to co-operate fully with CRA’s ongoing audit in order to respond to any concerns raised by CRA, and is committed to improving its policies and procedures to ensure continued compliance with the ITA. IRFAN-Canada is confident that a fulsome examination of the charity’s books and records and its due diligence procedures will evidence IRFAN-Canada’s long-standing commitment to providing financial, material support and relief to the poor and destitute in areas affected by conflict and natural disaster throughout the world.

Despite the suspension of receipting privileges, IRFAN-Canada’s donors can continue to have full confidence and trust in the organization’s management to assure that their contributions are used in a legal and effective manner. IRFAN-Canada still remains a registered charity that can lawfully receive donations from the public and deliver vitally important programs and services to tens of thousands of poor and needy people. 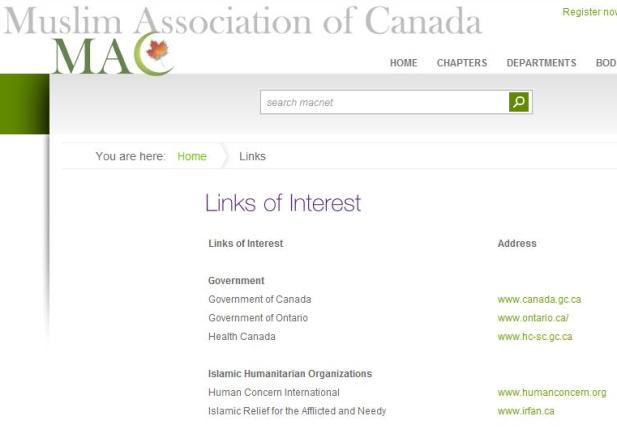