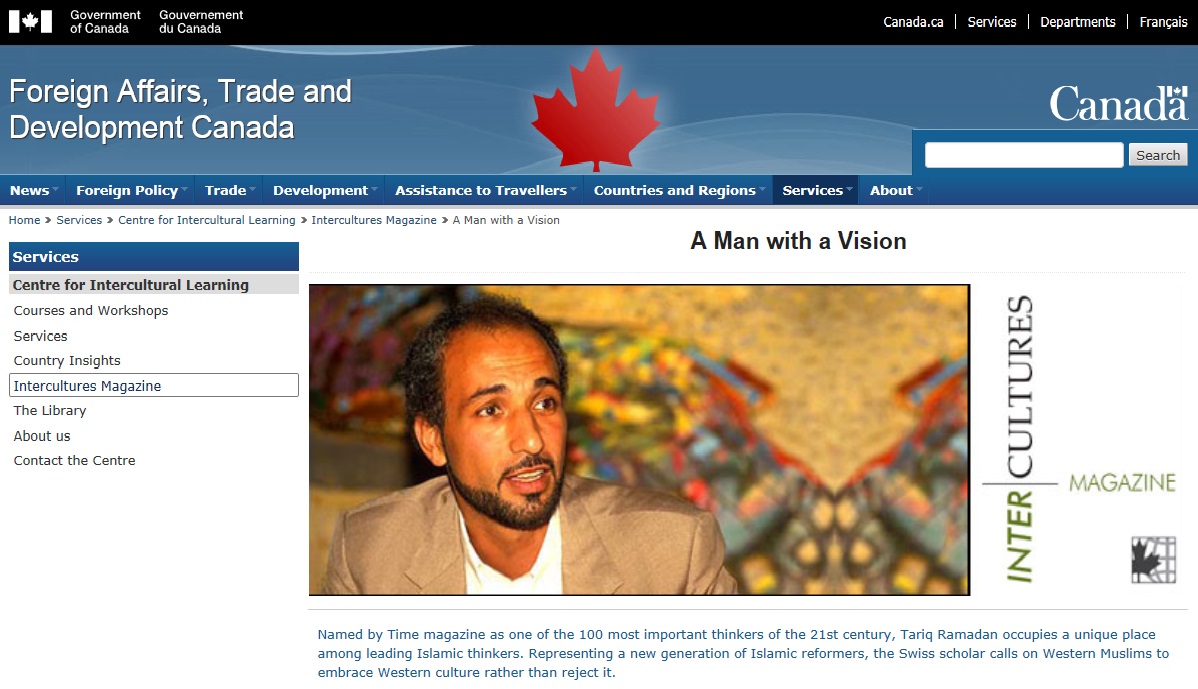 The complacent interview appeared in Intercultures (Volume 1 No 2), an internet magazine published by Canada’s Department of Foreign Affairs. The publication date is not indicated. The English version of the article was reproduced on Tariq Ramadan’s website on April 25, 2005. The article was likely published in early 2005 and is still on the Department’s website in mid-November 2014.

Tariq Ramadan is undeniably “A Man with a Vision.” However, if the authorities at Foreign Affairs had done their due diligence, they would have concluded, already in 2005, that Tariq Ramadan’s vision is incompatible with individual rights and freedoms that Canada’s Foreign Affairs Department ought to be promoting abroad, and that the Canadian government as a whole ought to be defending at home.

The unidentified Foreign Affairs complacent interviewer asked Tariq Ramadan about the influence that his father and his grand-father had on his intellectual development without ever alluding to their totalitarian ideas. The interviewer let Ramadan describe himself as a bridge-builder between cultures, although Ramadan had already told Egypt Today in an interview the year before, that Islamists operating in Canada must use the Canadian legal framework (“one of the most open in the world,” Ramadan had highlighted) to subtly and gradually introduce rules of sharia in Canada. At the time, Tariq Ramadan strongly urged his supporters in Canada not to openly mention their commitment to sharia: “The term shariah in itself is laden with negative connotations in the Western mind,” said Ramadan. “There is no need to stress that. […] For the time being this is not how we want to be perceived,” he added.

In a speech given in Detroit in 2013, Tariq Ramadan defined jihad as “the way we implement sharia.” Ramadan’s formulation has the advantage of including violent and non-violent methods used by Islamists to reach their goal.

HASSAN AL-BANNA – In a book published in 2002, Tariq Ramadan gave an unconditional support to the ideas of his grandfather Hassan Al-Banna, the founder of the Muslim Brotherhood:

I have studied Hassan Al-Banna’s ideas with great care and there is nothing in this heritage that I reject. His relation to God, his spirituality, his personality, as well as his critical reflections on law, politics, society and pluralism, testify for me to his qualities of heart and mind….. His commitment also is a continuing reason for my respect and admiration.

In the Egypt of the 1940’s, Hassan Al-Banna encouraged suicide attacks and other terrorist activities. He dedicated a whole book to explain the theological justifications of offensive jihad. In that book, Al-Banna defended the principle that “It’s an obligation for us [Muslims] to fight against them [the non-Muslims] after inviting them [to join Islam], even if they do not fight against us.”

Imam Hassan Al­Banna used to say to his disciples, “Give me twelve thousand believers, and I will conquer with them the mountains, cross the seas and invade the land.”

Hassan al-Banna’s 50-point manifesto promotes the abolition of political parties and the instauration of a one-party State, the reform of the law, so that it will conform to sharia, an increase in the number of youth groups promoting jihad, the prohibition of dancing, the censorship of movies and plays and a dress code for all citizens enforced by a religious police.

In another text (To what Do We Invite Humanity?), Hassan Al-Banna refers to Adolf Hitler as a role model for Muslims looking for “success and fortune.”

YOUSSEF QARADAWI – In 2002, the Muslim Brotherhood spiritual guide Youssef Qaradawi, publicly endorsed Tariq Ramadan’s understanding of Islam by asking him to preface a compendium of fatwas that he published in French. In 2009, in his book Radical Reform, Ramadan presented Qaradawi as a “prominent scholar” who has outlined the attitudes and the kind of behaviour that Muslims living in the West should adopt.

Over the years, Youssef Qaradawi justified the assassination of those who leave Islam (apostates) and homosexuals, he endorsed female genital mutilations, he described Hitler as “Allah’s envoy who came to punish the Jews for their corruption,” before adding that “Allah willing”, the next time it will be the believers [the Muslims] who will massacre the Jews.

In his classic Priorities of the Islamic movement (based on a conference given in Algeria in 1990), Qaradawi justifies the use of coercion to enforce sharia principles. He stresses that one of the political principles brought to this earth by Islam is “changing wrong by force whenever possible.”

In another speech given in Toledo (Ohio) in 1995, Qaradawi predicted that the Islamization of Western societies could be accomplished by non-violent means, by proselytism (dawa). Qaradawi may have been led to make his prediction by taking into account the ease with which the Islamic penetration of government institutions and other Western centres of influence has proceeded so far:

In 2012, Tariq Ramadan was chosen to head a research centre on sharia based in Qatar. At the launch of the center, Tariq Ramadan was greeted by Youssef Qaradawi, Mustafa Ceric and Yusuf Islam (former singer Cat Stevens). In 2010, Mustafa Ceric, then mufti of Bosnia-Herzegovina, enjoined the participants at the Global Halal Congress in Islamabad (Pakistan) to “Conquer the world through Halal movement” (also GMBDW).

The goal of Islamists involved in the halal scheme is to impose standards at all stages of production, transportation, and commercialization of products. That is why Mustafa Ceric can reasonably talk about “Conquer[ing] the world through Halal movement”.

In 1989, Yusuf Islam was amongst the first Muslim Brotherhood activists in the U.K. to openly express his support for the fatwa issued by the Ayatollah Khomeini calling for the assassination of writer Salman Rushdie. (Video of the interview given by Yusuf Islam to the BBC) 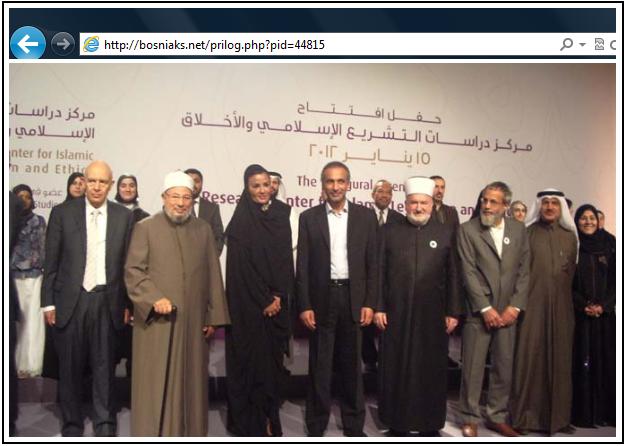 HASSAN TURABI – In a 1995 interview published in L’islam, un autre nationalisme (Islam Another Nationalism), Tariq Ramadan presented Hassan Turabi as a “moderate” although Ramadan rejects the very notion of “moderate Muslim” when speaking to Muslim audiences, as evidenced by his 2011 Dallas speech. (video 3 – 02:36)

Hassan Turabi was the primary force behind the introduction of sharia in Sudan during the eighties and nineties. In an immigration case heard by a Canadian tribunal in 2000, Turabi’s Sudan was described as a “country of horrors [where] people are whipped in the name of Shari’a, terrorist bases are harboured and the Christians in the South are exterminated.” In this case, Turabi was also described as “the ideologue of the military regime in Sudan” and the leader of an “Islamist International”. (X [Re], 2000 CanLII 21343 [IRB])

In another case heard by Canada’s Federal Court, it is mentioned that “[Usama] Bin Laden and his entourage moved to Sudan in 1991 at the invitation of the Islamist leader, Hassan Turabi.” (Section 274 – Almrei (Re), 2009 FC 1263 CanLII)

While Hassan Turabi was attorney general of Sudan in 1985, Mahmoud Mohamed Taha, a Muslim theologian, was executed for apostasy by the State because he had openly advocated the reform of Islamic principles.

MUSLIM COLONIZATION OF THE U.S. – On July 27, 2011, in a speech given at a fundraiser organized by the Islamic Circle of North America in Dallas, Tariq Ramadan openly enjoined his supporters to colonize the United States of America “with our understanding of Islam, our principles.”

The best compendium of information concerning Tariq Ramadan remains Brother Tariq: The Doublespeak of Tariq Ramadan, a book authored by Caroline Fourest that was first published in French in 2004.