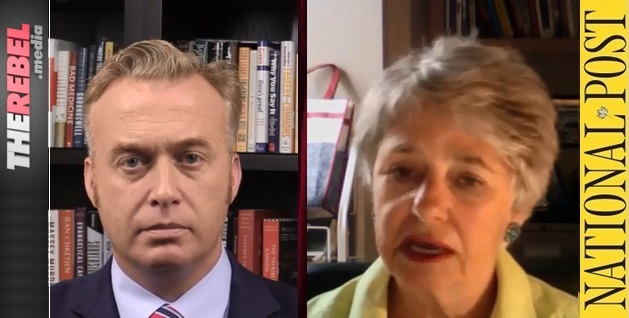 On September 1st, 2015, on its website, and the next day, in its paper edition, the National Post published an article by columnist Barbara Kay against Bill 59: Quebec wants to uncover faces while it covers mouths. Later that day, she gave an interview on the subject to Brian Lilley on TheRebel.media. 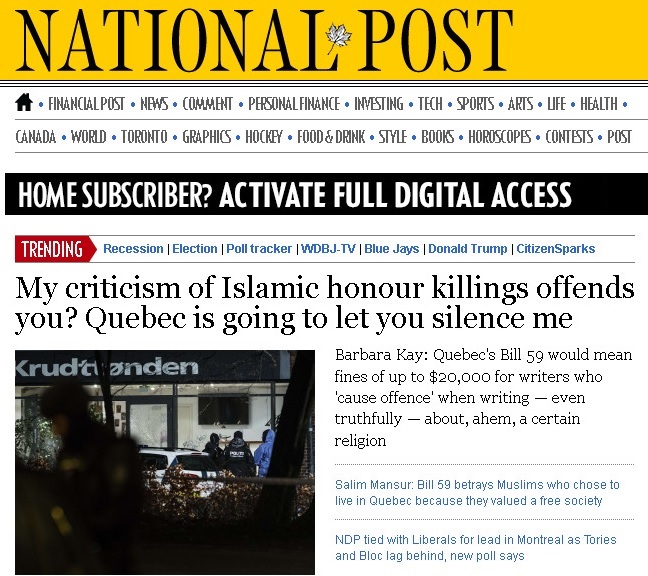 Over the years I’ve written many columns about honour killings in Canada’s South Asian communities. Under the terms of Quebec’s proposed Bill 59, my frequent allusion to the demonstrable fact that most victims of honour crimes are Muslim girls and women might, posted on the Internet as all my published writing is, lead to prosecution for Islamophobia with a possible fine of $20,000, and my name posted to an online list of offenders in perpetuity. Would that stop me from criticizing the cultural roots of honour crimes? Yup, it sure would.

Such a lawsuit could be initiated by any individual who feels offended by a statement that he or she believes promotes “fear of the other.” The fact that what I have written is “true” and “in the public interest” would not be grounds for my defence, as they are under the actual laws of defamation.

This bombshell makes a mockery of the federal government’s 2013 move to end scrutiny of Internet speech in abolishing Section 13 of the Human Rights Act. Most worrisome, if made law, the bill would allow the Quebec Human Rights Commission (QHRC) to pursue websites it deems disrespectful to Islam.

This would put in the crosshairs, for example, the useful online publication Point de Bascule, which has for many years assiduously and with meticulous annotation, connected significant behavioural dots linking Muslim Brotherhood operatives to what is known in anti-Islamist parlance as the “stealth jihad.” (The biggest losers, if pointdebasculecanada.ca were to be censored, by the way, would be CSIS and Homeland Security in the U.S.)

The site’s publisher, Marc Lebuis — a source and a friend — who delivered a blistering denunciation of Bill 59 early in the hearings, is well placed to criticize the double standards inherent in tribunals fixated on combatting hate. In 2008, as an experiment (for Lebuis hates speech codes, but wanted to provoke public discussion on free speech), he filed a complaint with the federal HRC against a Salafist imam whose writings excoriated Jews, praised beheadings, lauded the executions of gays and called for violent jihad. As he had anticipated, the HRC declined to hear the case.

The QHRC would doubtless exercise the same willed blindness to hatred spewed by Islamists under an activated Bill 59. Its driver, QHRC director and top constitutionalist Jacques Frémont, is consumed with the alleged, but unproven, scourge of Islamophobia in our society. In a speech broadcast by Radio-Canada on Dec 2, 2014, Frémont explained he planned to use the requested powers to sue those critical of certain ideas, “people who would write against […] the Islamic religion,” but did not add “or any other religion.”

Frémont has indicated that Bill 59 is inspired by UN resolutions, by which he doubtless means Resolutions 16/18, initiatives of the 56 Islamic states that comprise the Organization of Islamic Cooperation (OIC) to suppress hate speech, which they equate with criticism of Islam.

The hearings have revealed that the nominated, not elected Frémont has a rather grandiose, and in more than a few observers’ eyes, totalitarian-lite vision of himself and the QHRC as a vehicle for social engineering, with the power to investigate, prosecute and even itself file the complaints it wishes to pursue.

Frémont has publicly stated he sees the QHRC’s role as one that should be “making the law” by choosing “risky” cases — in this case challenging the settled fact that the Internet comes under federal authority — and that Bill 59 will “change mentalities” in order to “change culture.” There’s more than a whiff of Big Brotherism in these phrases.

Premier Couillard is now on the defensive, as well he should be for permitting this dreadful bill, which would ascribe criminal-court powers to a mere “commission,” to see the light of day, when “incitement to hatred” is already covered by the Criminal Code.

In 2005, Quebec was to my knowledge the first jurisdiction in North America to adopt an anti-Shariah resolution. Had Bill 59 been active then, such a resolution could have been deemed Islamophobic by the QHRC.

Earlier this year, Quebec adopted a unanimous resolution to denounce the barbaric punishment OIC member Saudi Arabia meted out to 31-year-old Saudi Arabian blogger Raif Badawi (whose wife lives in Sherbrooke, Que.): 10 years in prison and 1,000 lashes for insulting Islam. Under Bill 59, Raif Badawi would not be innocent. Should we rejoice that he would not be imprisoned or flogged in Quebec, only censored and fined?

Most paradoxically, Bill 62, also up for passage, will proscribe face covering in the public sector, a good thing. Why would a government that wants to uncover some faces for the sake of “religious neutrality” want to cover all mouths for the sake of one religion?

National Post (August 15, 2015): EDITORIAL Bill 59 hate speech law “is a danger to democracy and should not pass” 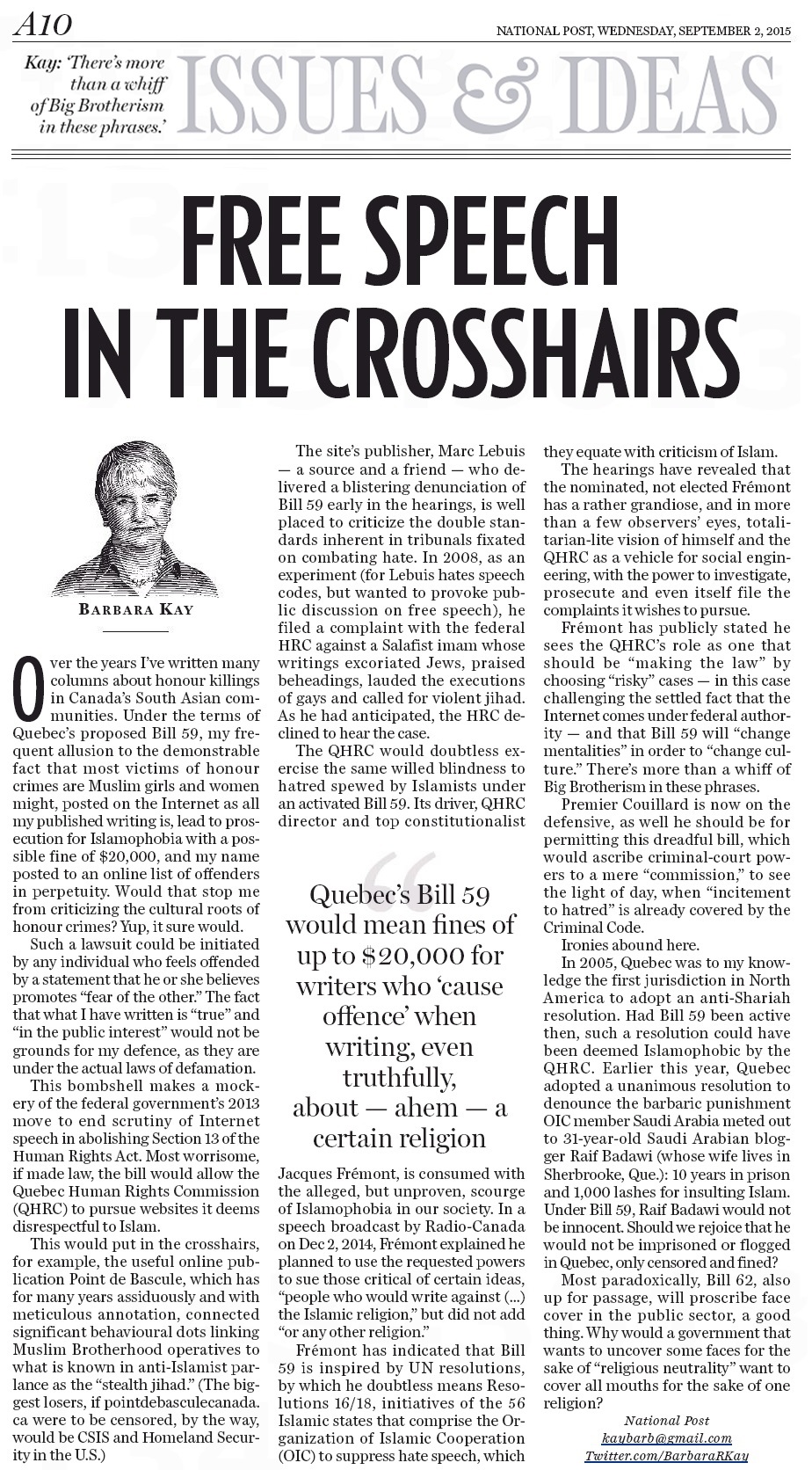