After a 2-year boycott, Tariq Ramadan made a comeback at the Islamic Society of North America annual convention; ISNA-Canada sent a delegation 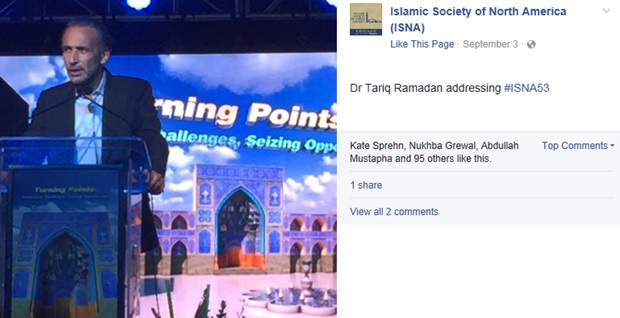 Tariq Ramadan was one of the main speakers at the Islamic Society of North America’s 53rd annual convention that took place in Rosemont (Illinois) on September 2-5, 2016. The program of the event (including the list of speakers) is available on ISNA’s website / WebArchive – Archive.Today.

Ramadan’s presence this year came after a much publicized boycott that lasted two years. In August 2014, Tariq Ramadan justified his decision by criticizing the ISNA leadership for being “too often silent, as if paralyzed by fear” regarding certain decisions taken by the Obama administration and “the deeply troubling and unacceptable methods used by the FBI.”

In August 2014, Tariq Ramadan had also announced that he would not attend the next RIS convention in Toronto that took place in December 2014. “The reasons are different, the causes similar,” said Ramadan, at the time.

Tariq Ramadan: The problem is that some of the participants [at the RIS convention], scholars or preachers, under the guise of Sufism or in the name of avoiding partisan politics, defend highly politicized positions of support for states and dictatorships. Their silence and their inferences in the heart of the West, in Toronto or elsewhere, constitute visible support for the Gulf petro-monarchies or for despots such as al-Sissi in Egypt.

Shortly after Tariq Ramadan’s 2014 announcement, Global Muslim Brotherhood Daily Watch (GMBDW) pointed out that Ramadan’s stand coincided with the RIS organizers’ decision to invite Abdallah Bin Bayyah to speak at its December 2013 convention after he broke with the Muslim Brotherhood spiritual guide Youssef Qaradawi and his International Union of Muslim Scholars and later joined a group of Muslim scholars (including Taqi Usmani) at a meeting sponsored by the United Arab Emirates. Hamza Yusuf who spoke at the 2013 ISNA convention and who has described Bin Bayyah as “my teacher” did not participate at the last three ISNA annual conventions.

AUGUST 31-SEPTEMBER 1, 2013 – ISNA convention: Hamza Yusuf and Tariq Ramadan spoke at the convention; Abdallah Bin Bayyah was not scheduled on the program

DECEMBER 23-25, 2016 – RIS convention: No announcement on the website yet / WebArchive – Archive.Today 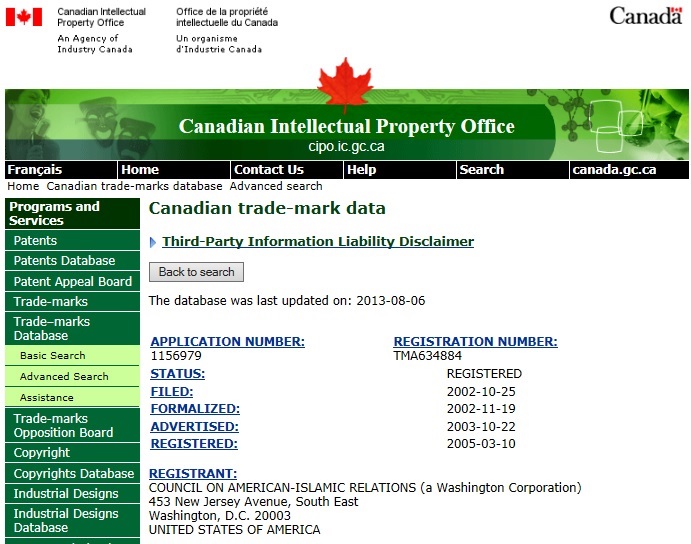 Public disagreements among Islamist leaders and organizations belonging to the Muslim Brotherhood infrastructure are rather rare.

Another case that comes to mind, however, is the decision of the Washington-based Council on American Islamic Relations (CAIR) to resort to a Canadian government entity, the Canadian Intellectual Property Office, to prevent the Islamic Society of North America to use its acronym CAIR in Canada.

During the legal battle that occurred in the early 2000s, CAIR-Canada founding Chair, Sheema Khan, supported the Washington-based CAIR’s claim and swore in an affidavit that it “has direct control” (see point 8) over the activities of its Canadian branch CAIR-CAN (CAIR-Canada / since renamed National Council of Canadians Muslims).

Point de Bascule (August 13, 2013): Early 2000s – Legal battle between CAIR and ISNA to get the acronym CAIR as trade-mark in Canada

ISNA-Canada sent a delegation to the ISNA convention 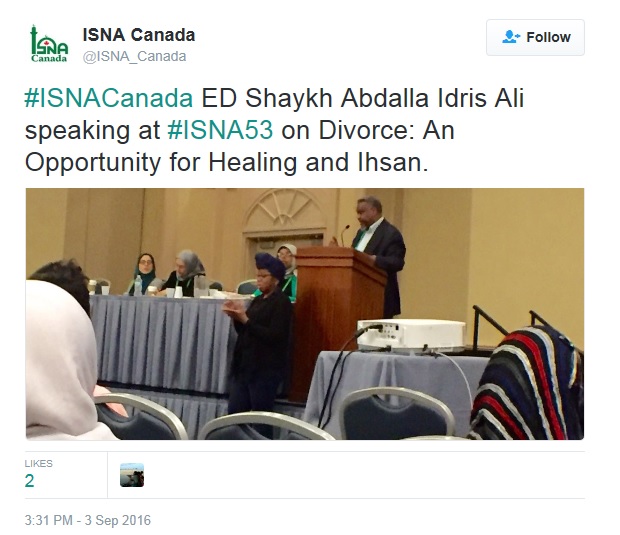 As its name suggests, the Islamic Society of North America (ISNA) was established to pursue its objectives in the U.S. and in Canada. The 2006 ISNA Board of Directors / Archive.Today listed side by side officials who were representing the organization in the U.S. and others in Canada. That year, a third group of directors, including Canada-based Jamal Badawi, Khadija Haffajee and Abdalla Idris Ali were listed as “members at large.”

On September 20, 2013, the Canada Revenue Agency (CRA) revoked an ISNA-Canada substructure’s charitable status after concluding that it had provided tax receipts to a second entity that transferred funds to a third entity whose armed wing wages jihad in India. While the ISNA-Canada substructure (ISNA Development Foundation) was being audited by the CRA, ISNA published a message to distance itself from ISNA-Canada:

ISNA message / Archive.Today: ISNA Canada and Islamic Development Foundation (IDF) in Canada are federally registered charities in Canada. It is important to note that the leadership and management of both of these organizations in Canada are separate from ISNA and its IDF (a department of ISNA), registered in the United States. There has been no links of authority or responsibility between the United States and Canadian organizations for a few decades, despite the similarity of names.

The bylaws of the Islamic Society of North America (ISNA) do allow Canadians to become its members and elect an officer designated as vice-president (Canada) who sits on the executive council of ISNA, headquartered in Plainfield, Indiana. However, these members are individuals and have direct relationship with the Indiana-based ISNA and its IDF. No communication or relationship with them flows through the Mississauga-based ISNA Canada or its IDF.

On the other hand, ISNA’s youth organization, called the Muslim Youth of North America (MYNA), presents its activities as being integrated in all of North America / Archive.Today: “Over the past 30 years, MYNA has built an expansive network of empowered youth leaders and advisors across the United States and Canada.”

JANUARY 20, 2011 – An audit of ISNA-Canada revealed that the organization had mismanaged more than $600,000 collected in charitable donations. According to the Toronto Star, some of that money was used to cover expenses made by the ISNA-Canada secretary general’s daughters although they were not working for the organization. The Toronto Star also highlighted that ISNA-Canada “had a world-renowned Islamic scholar on its payroll [Farhat Hashmi], despite her not actually working for ISNA, in a bid to help her immigrate to Canada, the audit revealed.”

SEPTEMBER 20, 2013 – The Canada Revenue Agency revoked an ISNA-Canada substructure’s charitable status after coming to the conclusion that it had provided tax receipts to a second entity that transferred funds to a third entity whose armed wing wages jihad in India.

Point de Bascule (December 12, 2013): Reviving the Islamic Spirit – In 2003, the launch of the RIS conventions in Toronto was sponsored by an organization tied to Al-Qaida (WAMY sponsored the event.)

Point de Bascule (December 12, 2012): Hamas’ fund collector, IRFAN Canada, is added to the list of sponsors for the Islamist convention in Toronto (Then Liberal leadership candidate Justin Trudeau spoke at the event.)

Point de Bascule (January 8, 2014): Tariq Ramadan asks for PM Erdogan’s resignation at RIS 2013 in Toronto and finds himself on the defensive after Turkish media report the news