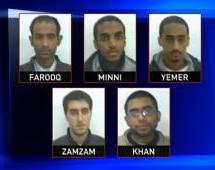 CHICAGO, Ill. – From the Fort Hood massacre to the failed attempt to blow up an airliner on Christmas day, Islamic jihadists have never been more active in their attempts to attack the U.S. Many of the plots were hatched by U.S. citizens — homegrown jihadists.

Exibit A:Five middle class friends from the Washington, D.C., suburbs: one was a dental student at a local university, all were praised as “good kids” by leaders of their northern Virginia mosque.

“I have always known these kids as fun loving, career focused children that had a bright future ahead of them,” said Mustafa Abu Maryam, youth coordinator of the young men’s mosque in Alexandria, Va.

Now, a good part of that “bright” future may be spent behind bars. The men traveled to Pakistan in November to link up with Islamic terrorist groups and wage jihad against U.S. troops.

Terrorism experts say the rise of homegrown terrorism has left the U.S. more vulnerable to attack than at any time since 9/11.

“I see these individuals, these homegrown individuals, as sort of the crown jewel for international terrorist organizations like al Qaeda,” Rick Nelson of the Center for Stragic and International Studies said.

Indeed, 2009saw no shortage of American recruits for al Qaeda and its allies:

-Fourteen Somali Americans are under indictment for providing support to an al Qaeda-linked group in Somalia.

-And two Pakistani Americans in Chicago were charged with seeking to attack targets in Denmark and India. One of those men, David Coleman Headley, traveled to India to scout out targets for the Islamic terror group, Lashkar e-Taiba.

The group later struck those targets in the Nov. 2008 Mumbai massacre that killed 166.

“Someone who has the ability as a legal U.S. resident to travel fairly freely throughout the world with a passport makes them a very useful tool,” Nelson explained.

Headley and his partner in the plot, Tawahurr Hussein Rana attended school together in Pakistan. The two reconnected after moving to a heavily Pakistani neighborhood in north Chicago.

FBI agents seized two al Qaeda videos during a raid at Rana’s home. The videos featured speeches by Osama bin Laden and vicious rhetoric against the U.S., Denmark and Jews.

The Chicago case has raised fears that American Islamists could have designs outside the U.S.

They’re already attempting to wage jihad inside the U.S., in places like Springfield, Ill., where a white convert to Islam was recently arrested and charged with attempting to blow up a federal building.

A federal affidavit revealed Finton traveled to Saudi Arabia in 2008 and received $1,400 from an unidentified man in that country.

“These networks are able to recruit on the Internet and there are so many jihadist Web sites out there that particularly play to young, impressionable individuals,” former FBI special agent Dennis Lormel said.

A co-worker of Finton’s at a fast food restaurant in the blue-collar town of Decatur, Ill., said he “didn’t like America very much.” Finton and other American Muslims turned that rage against their country in 2009.

-Dearborn, Mich.: The leader of a radical Islamic group was killed in a shootout with FBI agents.

Fort Hood wasn’t the only successful Islamic terrorist attack on American soil in 2009. In a shooting almost ignored by the media, a radical Muslim killed a U.S. military recruiter in Arkansas last spring.

Lormeltold CBN Newsthe “low-tech” paramilitary tactics used in those two attacks and in Mumbai could be the future of homegrown jihad.

“I think that plays to what happened in Mumbai,” he said. “You had a group of individuals who were able to commit such devastation. Even though the death count was nowhere near 9/11, that still had a devastating impact on India.”

Wafa Sultan, a former Muslim and author of the book A God Who Hates, told CBN News that until America faces the fact that Islamic ideology drives the jihadists, homegrown plots will continue in 2010.

“I heard it a million times [at mosques here in the United States],” she said. “That we are here to spread Islam and eventually to replace the American constitution with Islamic Sharia law.”